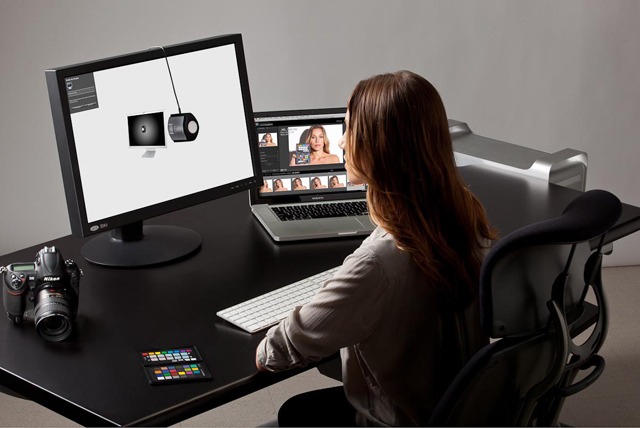 Every photographer knows that they should be “profiling” their computer monitors and projectors. But, how many photographers understand how and why they should do this? This quick look under the bonnet should help give a basic understanding of the science behind the voodoo.

Profiling your display is only the last step in the larger task of getting it set up for viewing photographs properly. There are actually several stages to correctly set up a display, and some are more important than profiling. So it’s misleading to call this just profiling.

It would be more accurate to call the process Calibration, Correction and Profiling. It’s a three step process, where the photographer adjusts the display with the assistance of specialised equipment, and fine-tunes the results.

The first step is the most useful, but most overlooked step in adjusting your display: fiddling with the display’s controls. It’s the most important step because, if your display isn’t properly adjusted to start with, you’re over-relying on the software and making it much harder to get a good result.

It’s crucial that the display’s picture controls are adjusted to get the best image possible. Old friends like Contrast, Brightness, Display Mode and RGB have a much greater effect on image reproduction than clever software adjustments. Some of these adjustments can be made with a test image, and some are made much easier with specialised equipment.

Most test images contain a graduated grey scale, with white at one end and black at the other. Judicious use of Contrast and Brightness controls should enable you to correctly set your white and black points. Generally speaking, Brightness adjusts the black point, and Contrast adjusts the white point. Adjust each control until you see even steps between every graduation. You should also be aware of any tint in the greys — this will have to be fixed too.

There’s No Such Thing as White

Sorry. That was a bit of a heavy blow so early in the article. White isn’t a colour, it’s a mixture of colours. You know how paint comes in 37 flavours of white? Well, that’s because it’s largely subjective, and people perceive white mixtures differently in different situations. So, if we’re going to attempt to get our displays set up to a professional standard, we’re going to have to standardise White first.

Colour experts have come up with a system of temperatures for display Whites. White on an overcast day has a different balance of colours to White in the pub. All you need to know is that this balance is expressed as a temperature in degrees Kelvin, with a lower number being red-heavy and a higher number being blue-heavy.

Yeah, it’s not that simple. Most rooms lit with natural light have a White Temperature of around 5500K, so this is a good place to start. Some professionals remove this ambiguity by drawing the curtains and illuminate the room with special 6500K light bulbs!

How Bright Is White?

Another environmental consideration is how much light there is in the room. If a photographer’s display is set too bright, his images may end up too dark. So his display’s brightness should try to match the room’s illumination. White paper on the display should match actual ‘bright white’ paper, for the photographer’s brain to evaluate the image properly. A target brightness of 120 lumens is a reasonable starting point, but this depends very much on the room, weather and time of day. Experiment.

Get On With It!

OK, let’s put the theory to one side for a while and get started. Start up your software and position your gadget ready. Press Go. Your software takes a good look at your display and immediately rolls its eyes. What on earth were you thinking?!

Don’t worry, you did do a good job. It’s just that the software has higher standards (which is why you bought it in the first place). It should take the display through a warm up exercise, and it will quickly decide that you need to revisit its controls for a bit of fine-tuning.

Once it’s taken you through the controls again and told you how to fine-tune them, most of the hard work has actually been done. Your display is pretty close to optimum already. Have a rest. Treat yourself to a brew. The next step swaps the coarse sandpaper for the fine.

Should Have Bought a Better Display

As none of us is made of money, we have to buy the best display we can afford. That means buying a display which has design flaws and imperfections. Fortunately, your computer has a clever trick up its sleeve, and your software exploits this, to save you a few hundred quid.

Your computer’s graphics card contains a thing called a Look-up Table (LUT for short). Think of it as Codex, or Cypher. Put an RGB value in one end and the LUT gives an corrected RGB value at the other. Normally, the LUT does nothing, unless it’s programmed with a set of values.

2. Show Me a Number and I’ll Tell You That You’re Wrong

Your display adjustment software and gadget now work together, criticising your choice of display in a passive-aggressive manner. You will see a series of colours and tones flashing on the display. The gadget tuts to itself when it writes down (in red) what it sees.

A few minutes later, your software has a scorecard of displayed and observed colours and tones, which don’t quite match, but shouldn’t be a million miles apart. Your software calculates a set of befores and afters, ready for the LUT.

3. OK, Now You can Have Your Bloody Profile

As well as calculating appropriate LUT correction values, your software must provide an ICC Display Profile for your computer’s operating system and colour-managed software. Cleverly, your adjustment software did this at the same time as it worked out the LUT. A polite application would now give you the chance to see a Before and After view, as well as accept the new setting as gospel. You’re done.

Of course, you know what a Display Profile is, don’t you. I don’t have to remind you that it’s a digital fingerprint of your display’s colour and tonal range which is used by software to correctly display known xRGB values do I? No, I thought not.*

If you managed to stay awake and get to the end of this article, well done! You might remember that we talked about ambient white temperature and brightness. Funnily enough, in the UK, we’re used to the weather changing on almost a minute by minute basis. Things can go from dark and gloomy to warm and sunny in twenty minutes.

Some display adjustment gadgets are designed to stay around when you’ve finished with them. Their supporting software runs in the background, occasionally checking room illumination and updating the LUT to match ambient light. Clever stuff.

[* OK, maybe this subject might be suitable for another article]

Give us a try! Come along to a meeting and see what we do, before joining. See our programme, and see more about us and how to find us.